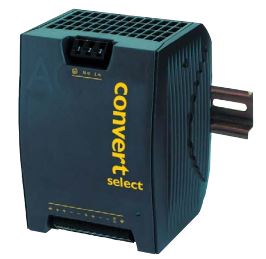 The Convert Select front end series represents a family of DIN-rail mountable dc dc and ac dc converters with power factor correction. The converters have been designed according to the latest industry requirements and standards. The converters are ideal for use in outdoor and other demanding applications to power building control systems, factory automation, industrial controls, instrumentation, electromagnetic drives, fans, and other dc loads. Different models are available with a single output or two independently regulated, electrically isolated outputs with 12, 24, 36, or 48 V. Special models for battery charging are available. The EW models are particularly suitable for 110 V railway applications; they have been designed in accordance with the railway standards EN 50155 and EN 50121.

The outputs deliver an electrically-isolated Safety Extra Low Voltage, SELV, (except models LWR/LWN1740) and low output noise. They are no-load, overload, and short-circuit proof. The electronically controlled short-term peak power capability of up to 150% of the rated output power enables the front end converters to deliver additional power to start-up motors or to safely operate subsequent circuit breakers. Built-in large sized output capacitors absorb possible reverse energy, which may be caused by quick deceleration of electromagnetic drives connected directly to the output. A green LED at the front cover displays the status of the output(s).