The anti-reflective (AR) polariser is a clear film that is applied to the panel which reduces the amount of reflection created by external bright light.

In a typical TFT display there are three layers which light passes through. These are the cover lens, an air gap, (which can be optionally filled using an optical compound) and the LCD TFT panel.

Within each of these there is a reflection of approximately 5% under direct light, which equals a total of 15%. With the anti-reflective polariser, the reflection is reduced to approximately 9%.

Up to three layers can be applied to a single display to further reduce the reflection. 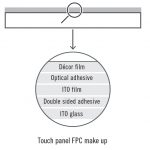 Décor film is an individual design option that is available for displays fitted with 4 wire resistive touch panels. The décor film is a customisable decorative surround, framing the TFT module.

The key features of the décor film mean that it can be mounted directly to the touch panel surface and allow the customer to have a flat product design. The film can be supplied with rounded corners for example or formed to a custom shape.

The whole décor film can be customised to allow for different colours, cut outs, indentations and printing with your logo.

This construction is based on a film-film-glass panel. Typically the décor film with a 4-wire resistive touch panel will have the upper ITO film manufactured larger than the bottom ITO glass. This allows for the extra space needed to bend the FPC if applicable. 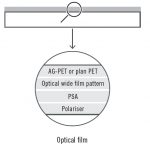 The optical film (O-film) polariser increases the viewing angle up to 80° and improves grey scale inversion.

Both of these effects make the display almost unreadable. With the O-film polariser applied to the TFT LCD from almost all angles it will show the ideal colour balance.