Relec Electronics in association with leading global manufacturer of power management devices, Bel Power, announces the introduction of the new LBC battery charger. This rugged high-performance product has been designed specifically as a high power battery charger for train and rolling stock systems. The high power density of the LBC series gives greater flexibility to system builders, allowing them to distribute weight more efficiently around the train.

Historically train borne battery chargers have been integrated within the large auxiliary converter which also provides power to HVAC systems, compressors etc. This has traditionally meant that large and heavy equipment (traction converter, auxiliary converter and battery ) are all in one location on the train leading to increased axle loads which leads to higher levels of abrasion of the track and train wheels. The LBC series allows the battery and charger to be separated, with weight being more evenly distributed across all the carriages of the train. 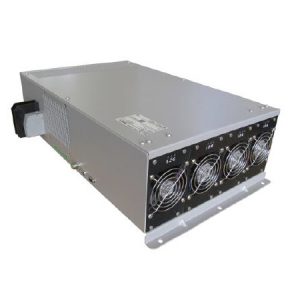 The LBC battery charger consists of two or three parallel independent AC DC converter modules employing a PFC (Power factor correction) primary stage followed by an isolated DC DC stage, to convert the 3-phase input voltage 400 / 480 VAC (line to line) to a bus voltage suitable for 110 V battery charging. The two or three parallel independent units inside the shelf with active current sharing are used, which safeguards reliability and partial redundancy of the system.
The LBC series can supply up to 12kW of output power at 110V dc with a class leading power density of 213W/cm3. The heart of the system is a digital system protocol (DSP) for control and monitoring of all system parameters making it the ideal building block for charging traction batteries. An Internal RS485 / CAN bus is used for command, monitoring and diagnostic information that is supplied to the shelf controller and to the external supervising system. External communication is provided by either CAN or Ethernet communication.

The small size and high density of the LBC allows it to be integrated and operate inside the train in a more or less clean environment. High reliability fans are integrated into each LBC module which are constanly monitored and are also field replaceable. Each time the LBC starts the fans run at full speed for several seconds, supporting a blow-down of any dust that has accumulated during previous session.